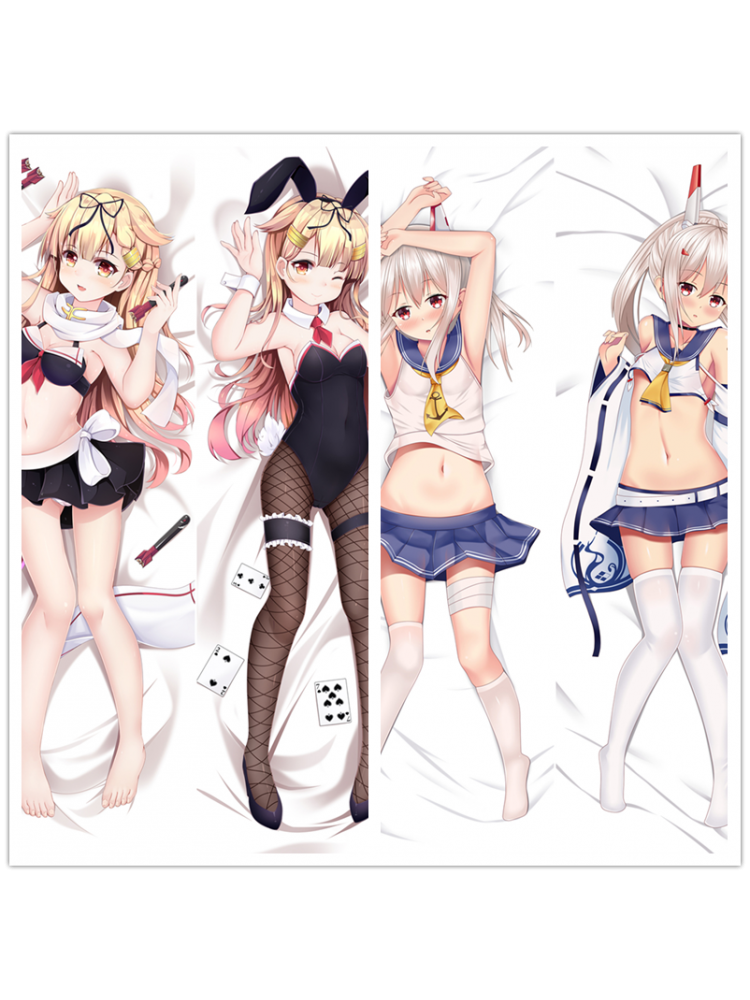 Kantai Collection, otherwise known as KanColle,is an anime Television series that is based on the game with the same titular. The story revolves around humanity losing control of the oceans because of the Abyssal Fleet. Its savagery and firepower is a threat to humanity and can only be countered by those who possess the spirit of kanmasu (fleet girls). When an Abyssal warship is detected, these girls hurry in equipping themselves with battleship armor and weaponry that bears a resemblance to ship parts. They carry along with them to battle canons and aircraft carrier flight decks.

The series started with Fubuki, the main protagonist, joining their naval base. She hopes to fight alongside one of the strongest fleet girls despite her lack of experience in combat. The story is set on Fubuki’s point of view and her strive to fight alongside Akagi, the best aircraft carrier in her division. The series is laden with humor and action you will grow to love each episode!

These girls live together in a small community where they are rigorously trained for combat. The girls have created friendship and familial ties that is unbreakable. Their main goal – to save the world from the unknown warships that had started to conquer their seas.

Yudachi ---- She is on the same squadron as Fubuki – Third Torpedo Squad. She is a cute girl with straight and long blonde hair and a black ribbon on top. She is normally wearing her black uniform, otherwise called seirafuku. She is a carefree spirit and known for attaching a filler in her sentences, “poi”. She is cheerful and has a rather friendly and sweet demeanor. Although she sometimes has too much stuff that she needed to use Fubuki’s drawer to fit in a huge teddy bear.

Arashio ---- An easy-going girl who likes to act like she’s extremely lady-like, but giggles a lot which in turn makes her cute rather than sexy. She is particularly known to laugh a lot and about anything but don’t get fooled – she handles a twin-gun turret and quad-torpedo launcher. Arashio literally sweet but destructive.

She has long brown hair with brown eyes and is often seen wearing a long-sleeve white shirt under an apron dress. While her base form outfit is a short-sleeved white shirt with bike shorts under a skirt and arm warmers.

SISTER-SHIPS ---- Mutsuki Anime Hugging Body Pillow She’s the first person Fubuki met in the anime-series of Kancolle. She thought that Fubuki would be scary being tagged as a Special Type Destroyer. She is friendly and helpful. She was the first person to befriend Fubuki and guided her to her room, where they met Yuudachi and the Sendai sisters. She tends to always find ways in seeking the Admiral’s approval. She is often seen with Fubuki and Yuudachi, guiding them and acting like a sister to both. She did suffer a bit off a breakdown when her sister, Kisaragi, sunk. It didn’t help as well when, on the movie, she saw her sister alive but had been converted into an abyssal – to which she and the others will need to sink. She wears a uniform-style outfit that somewhat exposes her naval and a green skirt matching a brown pantyhose.

Yayoi ---- Yayoi is often thought to be angry because of her emotionless and indifferent countenance. Despite this, however, she is generally polite and considerate of others. She has long lavender hair that matches her eyes. Wearing a purplish shirt that bears her navel and black skirt with black and white knee-socks, she uses gun barrels. Her left gun barrel is knotted with a tattered ribbon that belonged to Kisaragi, which Yayoi took after the latter’s demise.

Shimakaze ---- This young lady prides herself to be the fastest in her fleet. She is extremely hyperactive, borderline ADHD, and often boasts on her speed. Her uniform, ironically, is worn as a sleeveless as opposed to the others. Her outfit generally exposes her midriff and she matched it with extremely short skirts and undergarments that are easily exposed on her hips. She wears red and white striped stockings and incredibly high grey heels.

Her long blonde hair is held together by a hairband shaped like bunny ears. She carries with her twin high-angle gun mount and a quadruple (oxygen) torpedo mount.

Akatsuki --- She wears a black uniform similar to her classmates but with an anchor emblem on the chest. She has purple disheveled hair that matches her eyes and wears a navy hat. She is often heard saying that she wants to be treated like a real lady but she has a very childish manner.

Hibiki Anime Körper Kissenbezug ---- She wears a similar black uniform as her sisters as well as the anchor emblem on the chest and the navy hat. She has bleached white hair that is just as disheveled as her sisters. She normally has a vacant expression on her face as well as a rather indifferent attitude. Moreover, she has a strong Russian influence and speaks a little Russian. But when Fubuki tried to speak with her in casual Russian conversation, she couldn’t keep up with Fubuki.

Ikazuchi ---- Like Akatsuki and Hibiki, Ikazuchi has a rather disheveled hair with brown eyes. Her hair, though, is reddish-brown that is adorned with a small red hair-pin. Opposite Inazuma’s timid behavior, Ikazuchi is more rowdy and over-confident. She seems to have unlimited supply of energy and determination to be the best. She is bent on pleasing the admiral and be thought to be reliable. She carries with her a twin high-angle gun mount and triple-gun mount.

Inazuma Anime Körper Kissenbezug ---- She is wearing the same uniform as her class with tights that are particularly shorter than her sister-ships. Her hair is on a ponytail and is similarly disheveled the same as her sisters but shorter. She is seen to be very timid contrary to her sisters. The same with her sister-ship, Ikazuchi, she carries with her a twin-high angle gun mount and triple torpedo mount.

Kaga ---- She has a long brown hair that is normally done in a side ponytail. Like Akagi, she is seen wearing a muneate (chest protector) over her white and blue clothes along with a bow and arrow. She is a very serious and no-nonsense woman. She likes to keep to herself and rarely speaks or talks about her emotions and even her excitement. Although underneath a strong façade is a person who truly cares for her team and friends. She and Akagi had shared a bond that she normally doesn’t share with other people. So her less stoic side is only seen when Akagi is around.She possesses an air of authority, seriousness, and pride that stood out on the anime series. Opposing other characters that are behaves more like a child than a woman.

Kongou ---- She plays one of the big roles in the anime television series. Her hair is brown and extremely long that she normally wears in two braided buns. She has brown eyes that matches her hair and wears a black skirt on a white kimono top matched with a thigh-high boot. All the Battleships wear the same signature winged headband.

She is very cheerful and hyperactive both in a calm setting and during a battle. She prides herself to have an energy that has yet to be matched by any newbie. She is seen to be very fond of the admiral and mixes her Japanese language with English. On the first episode, she mentioned that she was constructed in England the reason she loves black tea.

Hiei ---- Has brown short hair that is normally swept to the sides. Like her sisters, she wears a modified kimono top with a tiny skirt and thigh high boots. She wears the same winged headband just like her sisters. She is quite boisterous as compared to her two other sister-ships, Haruna and Kirishima. She has terrible cooking skills but has great combat skills.

Just like her sisters, she wears a modified Kimono top with distinctly varied-colored skirt (in her case, red) and thigh high boots. She has a long gray hair and also wears the same winged headband on her head. She is of softer nature compared to her other sister-ships. Moreover, her personality is more humble and warm. Although she normally refers to herself in the third person.

In the game, you as the player, would be the admiral and you are in-charge of sending your fleet girls to battle against the scary Abyssal fleets. In the TV series and movie, the admiral remains to be unseen on screen. The girls would just be reporting to the crowd as if the crowd in general are the admirals.

Each character has their own strengths and weaknesses that is unmatched. They carry out their tasks in defeating the abyssal well even when they suffered losses on their part. It is a very entertaining and innovative way of creating a plot line about the wars and battleships that are being carried out by a woman. It has remarkable action scenes and the characters are eternally easy to the eyes.